At a very young age, Andrea Dunbar became a local sensation in her Yorkshire town. Having written a play called The Arbor, Andrea found her work commissioned for a theatre in London. She had a simple reason for its title: this is where the events in the play take place. This is where all of these events really happened. 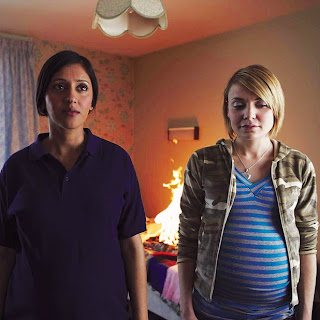 Clio Barnard’s new film, also titled The Arbor, is a unique venture into filmmaking. What could be called a fiction/narrative-styled documentary, the film uses actors to lip sync to audio interviews Barnard recorded with her subjects – mainly Andrea Dunbar’s relatives and acquaintances. The style is often immediate and unsettling: you know the actors are not saying the words, but their interpretation of the subjects’ responses and gestures, along with their gazes aimed directly at the camera give the film a haunting importance. Although one may argue that the subjects themselves could have easily been filmed and presented in real form, I found the technique a mesmerizing and worthy choice.

Dunbar’s story is a tragic and often difficult one to hear. Her plays tell of struggles with pregnancy, racism and violence (scenes from the play The Arbor are performed throughout the film in the Brafferton Arbor where Dunbar grew up, with residents surrounding the actors as a real audience) and the interviews with Dunbar’s relatives and acquaintances speak of a harsh family life and subsequent hardships experienced after Andrea’s early death. The interviewees’ heavy accents are almost indecipherable at times, but the story is compelling and heartbreaking, and the performances are really top-notch. During a post-screening Q & A, an audience member asked if English subtitles were considered. Barnard’s answer was that reading words at the bottom of the screen would have viewers missing the actors’ subtle facial movements and expressions. And with a film as uniquely styled as The Arbor, one really does not want to miss anything.