My friend and I have a running joke about all things primate: chimps, gorillas, apes, etc. There isn’t a specific joke we have going, but we both find them hilarious and terrifying. Chimps are scary. As cute and human-like as they might seem, they are unpredictable and incredibly strong. With the new Planet of the Apes reboot just released in theatres, my friend and I thought we were up for a special blend of fun and scares. But with quite good reviews, maybe we ought to take that film more seriously before venturing to the theatre. The other primate-focused film in theatres right now is Project Nim, and after listening to an NPR podcast about a similar scenario, I recently opted to choose reality over science-fiction.

Project Nim is James Marsh’s documentary on Nim Chimpsky, a chimp raised solely by humans in the 1970s. Nim was taken from his mother by psychologist Herbert S. Terrace soon after being born in order to see if he could be taught American Sign Language. The film follows Nim’s journey through several homes, including his initial homestead where he was treated more like a child in a family than an animal, and a research building in the country where the comings and goings of psychologists and students would cause the chimp to act out in anger and revolt. 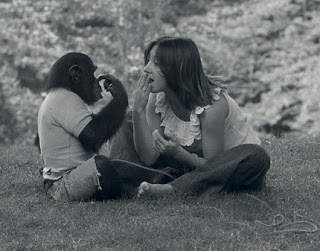 The documentary is a well-executed, suspenseful piece of filmmaking. Marsh sets up the story with a cast of interesting characters that include the types of heroes and villains one would find in a fiction narrative. The central character is always Nim, but he is as complex as any human you will see in a documentary this year; he becomes a type of antihero that you pity but also fear. The story is constructed with the use of great historical footage, and the interviews are quite intimate and direct at times, reminding me of Errol Morris documentaries like The Thin Blue Line and Standard Operating Procedure.

Although a metaphorical motif of having characters literally ‘removed from the picture’ is a little forced, as are some of the reenactments, overall Project Nim is a very interesting film. It raises many questions about our relationship with animals and the underlying, mysterious feelings these captive primates have. And Marsh seems to revel in these types of fantastical stories in our history, as he did in Wisconsin Death Trip and Man on Wire. These stories aren’t widely known, so let’s hope he continues to unearth many more and bring them to life, so we as an audience can join in on the discovery.