God knows I love a good documentary, but of course I indulge in different types of film. Therefore I have decided to dedicate a section of this blog to Realist Cinema. Although there doesn't seem to be a specific definition for this genre, I see any film with a docu-drama feel fitting this category.

There have been some prominent realist American films over the past few years that are set in the hostile, rural terrains of the American landscape. Ballast, Frozen River and the films of Kelly Reichardt (maybe less so, due to their warmer climates) fit the bill. This renaissance of simplicity over spectacle has aroused great interest in me. After seeing notices for Debra Granik's Winter's Bone, I knew that I had to check it out.

17 year-old Ree Dolly (Jennifer Lawrence) lives in the Ozark Mountains, taking care of her young siblings and ill mother. Ree struggles daily to provide, hunting for squirrels in the forest and counting on neighbours for provisions, even for the family's horse. When Ree is told her mostly absent, drug-abusing father put up the Dolly home as his bail and failed to attend his trial, Ree makes it her mission to find him before the property is taken away in a week’s time.

This is when Ree’s adventure of sorts begins. In a desperate search for her father, Ree treks to the homes of various neighbours she knew he was in contact with. She speaks with Teardrop (John Hawkes), her uncle, who is infuriated with Ree every time she brings up the subject of her father. When she is told in confidence to seek out the home of one particular resident, her resistance to find answers is met with fierce caution. A search for a missing man becomes a life or death situation. 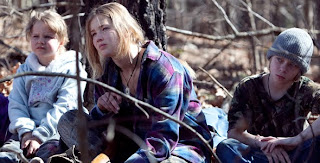 Winter’s Bone is both terrifying and beautiful. The landscape is stark, but the blues and greens of the forest and mountains are magisterial. These characters inhabit a world that at once offers nothing, yet is surrounded by infinity of discovery. The cinematography plays up the landscape, and the absolutely beautiful soundtrack that utilizes the music of the local inhabitants gives the hardships seen in the film a poetic resonance.

Lead Jennifer Lawrence is fearless in her depiction of Ree. She is hard-nosed and authoritative, and Lawrence doesn't shy away from any gruesome characterizations other actresses may have found too dirty. John Hawkes is also a great discovery, giving Teardrop a spectrum of emotions - he is at once despicable and caring. I knew I recognized Dale Dickey, who plays the convincingly brutal Merab. She guest-starred in a couple of episodes of Breaking Bad, playing a witch-like crack addict to great effect. Another stupendous and rangy portrayal.

Although I did enjoy the film, I felt it was repetitive when Ree traveled to the various neighbours' homes in search of answers. Another trek to another location. I understand that it displayed her need to persist, but it felt a bit redundant. A dream sequence including squirrels also seemed a bit out of place.

Winter's Bone is a film of brutality and the struggle to survive amongst an austere locale and people (a scene where Ree confronts some of these people is one of the most terrifying scenes I have seen in a while). It isn't shy in this sense, and I applaud the film's vision and honesty.